Lawrie Shabibi is delighted to present Immortals, a solo exhibition by Adel Abidin, opening on Monday, 14 September 2015 from 6 – 9 PM.

Known for his arresting video installations, Abidin has embarked on a radical shift in his artistic and studio practice by returning to painting, for the first time since 2003. Here he will present four large-scale oil paintings and a hand-painted site-specific installation, entitled Breaking News. 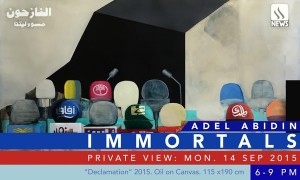 Immortals takes a playful look at the manufactured nature of Arab media and raises important questions of the role that it has played in shifting geographic boundaries and allegiances. Working in a new medium, Abidin transfers to painting his graphic imagery and brand of ironic humour for which his video art is recognized.

Abidin takes his cue from the visual content and images of Arab news channels. The role of these news stations has become increasingly significant in the spread and containment of ideologies, revolutions and counter-revolutions. These often share similar graphics, blinking text, and staged TV press conferences, all of which Abidin sees as formulaic, “over time these news channels have developed a typical method of presenting announcements to their audiences, this is something I want my own audience to reflect on.”

Adel Abidin
Adel Abidin (b. Baghdad, 1973) is an Iraqi visual artist, who received a bachelor’s degree in Painting from the Academy of Fine Arts in Baghdad in 2000 and a Master’s degree in Media and New Media Art from the Academy of Fine Arts in Helsinki, Finland in 2005 where he continues to live and work. Abidin’s works whilst focused on global social, political, and cultural issues, traverse a complex landscape of identity, memory, exile, violence and war.