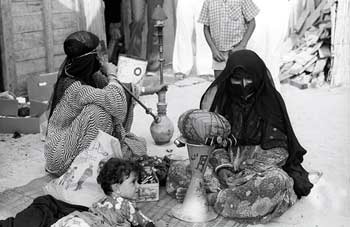 | “The Beginnings of a Nation”

During the celebration of The Arab Emirates 43rd year as a federation, we look back on a time before the concrete and steel towers, luxury hotels and sophisticated restaurants. “It was a period of transition from nomadic life to the first communities of this newly founded nation,” states Van Der Krol.
The Empty Quarter Gallery is pleased to present photographs of the United Arab Emirates in a compelling body of work entitled “The Beginnings of a Nation” by Dutch photographer Anita Van der Krol.
In 1975, the wife of a Dutch dredging engineer, Anita Van der Krol was in a unique position to shoot intimate pictures of the first nomads to settle in this land. Living as an expat in Jumeirah, she became one of the first inhabitants of Jebel Ali Village. Rather naively, Van Der Krol ventured out to the villages, souks and sandy desert, with two small children in tow and managed to win the confidence and respect of the hundreds of people she met while photographing their way of life. “Some of them had never had a photo of themselves before. They were delighted and you can see that in the photographs,” states Van der Krol. 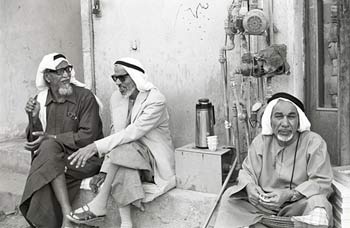 The Bedouin images from the desert must have been among the last taken, before this entire population gave up their nomadic existence and settled down to form towns and villages.

About artist:
Anita Van der Krol (born in The Netherlands 1946). Photography has played a key role  through Van der Krol’s entire life. She began photographing the world around her at the tender age of 10 and began formal training in secondary school. Between 1975 and 1980 Van Der Krol documented everyday life in the Dubai area with hundreds of photographs. A photographic book of this period has been published by Cewe Fotoboek Publishers entitledDubai 1975-1980
Van Der Krol continues to photograph in the Netherlands where she now lives.